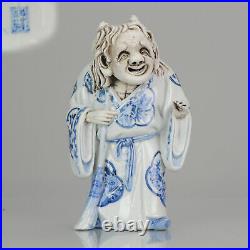 Jittoku was a foster child in the care of a nearby Buddhist monastery, where he swept the kitchen floors as did other odd jobs. Normally Jittokuy paires with Kanzan. They wear simple, rough clothing, and are often depicted with odd facial features.

Fugen is a Boddhisattva of compassionate wisdom. Jittoku would often bring left over food from the monastery kitchen to Kanzan, which may be one reason for the link with Fugen. Six character mark to the reverse reading "Kachutei Dohachi Zo". This dates from the later Edo or first half of the Meiji period (mid 19th century), a time spanning two generations of Dohachi when both ceramic sculptures and imagery of the supernatural were both popular.

The Dohachi Kiln was established in Awataguchi by a retainer of Kameyama fief, Takahashi Dohachi I around 1760, and the name Dohachi was brought to the forefront of porcelain and ceramic production by the second generation head of the family who attained an imperial following, and grew to be one of the most famous potters of the Later Edo period to come from Kyoto. He opened a kiln in the Gojo-zaka area of Kyoto (at the foot of Kiyomizu temple) in 1814. Well known for research into and perfection of ancient Chinese and Korean forms long held in high esteem in Japan, and at the same time working to expand the family reputation within tea circles, along with contemporaries Aoki Mokubei and Eiraku Hozen became well known as a master of porcelain as well as Kenzan and Ninsei ware. Over the following decades he would be called to Takamatsu, Satsuma, Kishu and other areas to consult and establish kilns for the Daimyo and Tokugawa families as well as Nishi-Honganji Temple. He is also held in the Museum of Fine Arts, Boston and Kyoto National Museum among others. / Overall Condition: 2 fingers have missing parts, 1 has a frit. We can not control this. For China (& rest of Asia) & US allow at least 2 to 3 weeks. Depending on the situation it can take up to 1.5 month. This also influences the tracking data shown online. You can follow it at. The item "Antique Edo/Meiji Period 19C Japanese Dohachi Statue Jittoku Bodhisattva" is in sale since Wednesday, January 20, 2021.