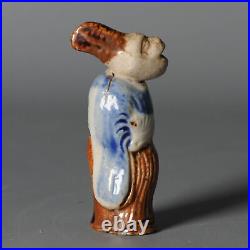 3500 "Make us an offer" Listings/. Antique Meiji Period 19C Japanese Hirado Netsuke Sanbosa dancing monkey. This is a most unusually made antique Hirado porcelain netsuke form model of a mischievous monkey dressed as a Sanbosa dancer.

The figure is crisply modelled with cobalt blue and iron brown glaze applied to the head dress and flowing robes. Both the head and the long tongue are separately modelled from the base. Sarumiwashi, trained monkeys, were a popular form of entertainment in Japan, and also performed as part of Shinto rituals relating to the New Year. The netsuke dates to the Meji period. Both the neck and the tongue are movable (we are trying to upload a movie of the moving pieces). The origins of Hirado ware (it's also called "Mikawachi ware") date back to the building of a kiln by Korean potters that were brought back to this area of Kyushu by landowners who had taken part in Toyotomi Hideyoshi's campaign to the Korean Peninsular at the end of the 16th century. The kiln here was used to fire porcelain for the Hirado clan up to the Meiji Restoration in 1868. As well as running the kiln, the Hirado clan was responsible for finding porcelain clay at nearby Amakusa and for the rapid development of skills and techniques, which are till alive today. This ware is characterized by its over painting of cobalt on a white porcelain.

Ever since the kiln was first fired, pieces were sent as tributes to both the court and warrior families and as a consequence, this china is of the highest quality, whether it be for everyday use or a special decorative item. The degree of care to produce items of such beauty and the delicacy of the work are part of its well established reputation. A great deal of tableware is being produced for use at some of Japan's finest restaurants. Items for use at the tea ceremony are also being made along with incense burner, sake flasks and vases. All are of the highest quality.

Possibly the tongue has some frits, not clearly visible. Small chip/frits to neck and firing flaw to neck.

Depending on the situation it can take up to 1.5 month. This also influences the tracking data shown online. You can follow it at.

This item is in the category "Antiques\Asian Antiques\Japan\Other Japanese Antiques". The seller is "theceramics_and_collectibles" and is located in this country: NL. This item can be shipped worldwide.