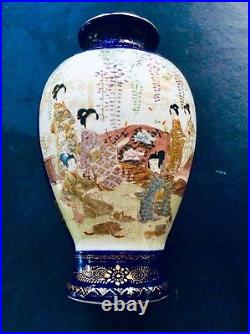 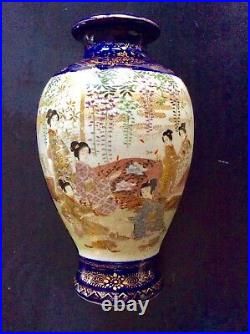 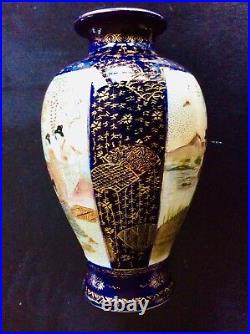 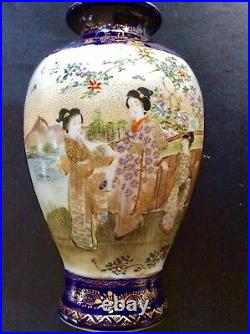 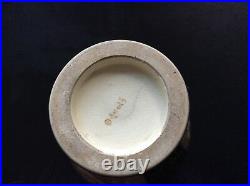 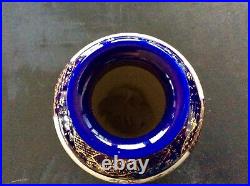 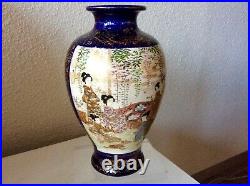 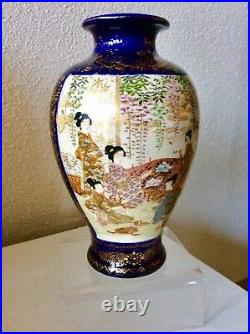 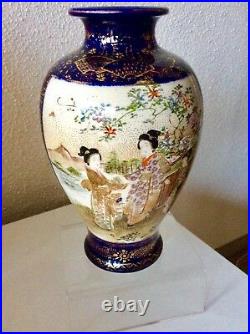 19 th century In like new condition a great geisha Japanese vase in bright colours from the Meiji period. With landscape with Wisteria plants. Great condition and no restoration or damage. Satsuma pottery dates back to the 16th century and is still produced today. This region in southern Japan is around the Kagoshima region.

The distinguishing features of Satsuma ceramics are they have an ivory, creamy or off-white and sometime beige appearance. The pottery is then hand painted with brightly colored enamels, gold and silver, in fine, intricate designs with careful attention to detail. They typically feature scenes from Japanese life, animals, flowers or landscapes. Gods, Goddesses and dragons are also well represented.

The design is then covered with a thin translucent glaze which deliberately ends up with a crackled finish. The designs also feature a form of decoration called moriage, which is a term used to describe the use of raised enamel on the surface of Japanese Satsuma pottery which lends an added effect to the pieces. Although the term can be used to describe a variety of types of pottery, the best known type of Satsuma ware has a soft, ivory-colored, crackled glaze with elaborate polychrome and gold decorations. Similar to Staffordshire in England, the region of Satsuma became synonymous with the product, thus Satsuma ware was produced by a wide variety of artists and kilns over several centuries.

Although the glaze crackling (called Kannyu) make the ceramics look more antique in appearance, the effect was used more to give richness and depth to the colours. The glaze was applied in thin layers and when heated sufficiently and cooled quickly, resulted in small hairline fractures that covered the entire surface. The style and techniques of the Satsuma potters were highly admired and copied the world over.

During the time that these original pieces were made, it was also popular for the potters to make small figurines of Japanese people. These were often caricatures of important people or of the Immortals, who also featured heavily in the decoration of the Satsuma pottery pieces.

These figurines are highly sought after items due to the fact that they are rarely seen in the Japanese antiques markets. There are many other Japanese statues and figures on sale all over the world, but only a handful of them are truly from the region that made the Satsuma name famous and valuable across the world.

Were also produced in very limited quantity in Kyoto in the mid-19th century, and is now the most sought after of the Satsuma wares. The item "Gosu Blue Japanese Porcelain Satsuma Meiji Edo period-Cobalt Vase Kyoto Kinkozan" is in sale since Wednesday, July 24, 2019. This item is in the category "Keramiek en glaswerk\Buitenlandse keramiek\Azië". The seller is "dutchartcollecter" and is located in Gasselte. This item can be shipped worldwide.