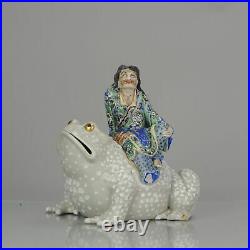 He has an animated expression on his face and lovely colored robes. Liu Hai God of Wealth.

Liu Haior Liu Haichan is another Daoist god of wealth often depicted with a string of coins and accompanied with a three legged toad. Various tales are told about him. The magical toad was said to be able to transport him anywhere he wished.

He may have been an official during the Jin dynasty and actually an alchemist called Liu Xuanying. China has some large toad statues that are associated with wealth and many people offer coins for good luck. Overall Condition: 2 legs of the taod restuck and 2 with damage. Liu has 1 frit/chip to body.