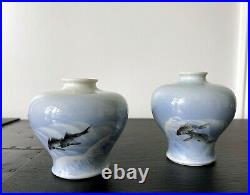 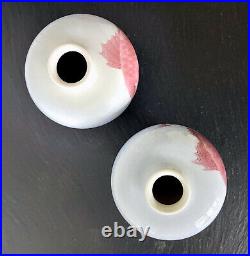 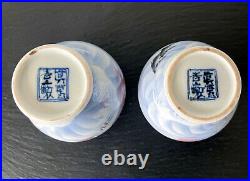 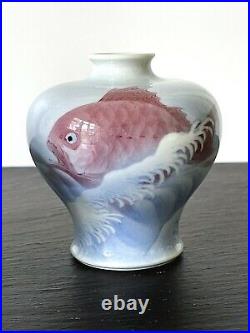 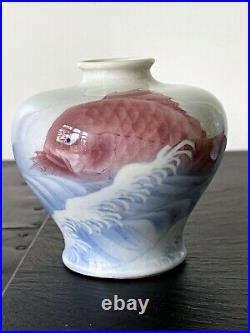 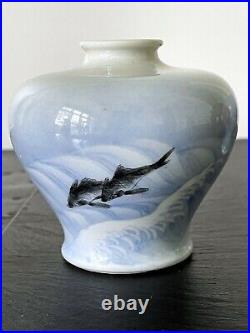 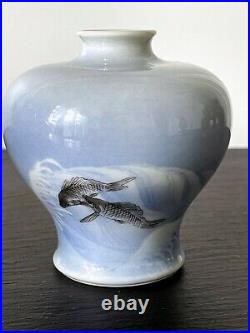 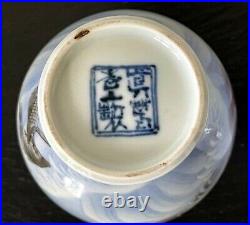 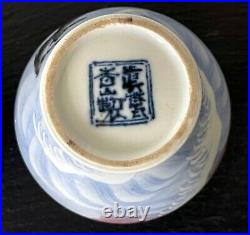 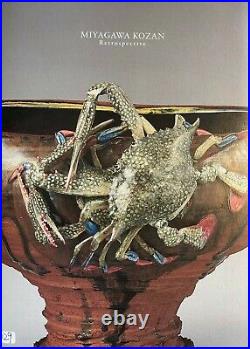 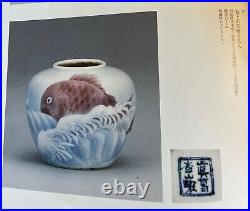 The vases were made in the form of jarlet with swelled shoulder in the underglaze period during the late Meiji era. Assembled by chance from different collections in America, the listed price is for one but they will make a lovely pair for a Kozan collection. One vase is slightly taller than the other. The surface of the vase was decorated on the front in a large copper-glazed carp swimming in a blue and white tinted waves. On the back, a pair of smaller koi were depicted in black enamel, on a overall background of light blue with a pleasant effect of diffusion and gradience.

The design is nearly identical on the two vases with very subtle but noticeable variation in details such as the position of the waves, the shape of the fins and the darkness of the black koi etc. They were both marked with the same blue seal on the base. It is likely that the vases were made by the same hand in Kozan's studio. A jarlet with the same design was included and published in his retrospective exhibition (see last two photos).

Which is likely from the same hand as well. Despite the small scale, these vases are lovely examples of Kozan's work using underglaze enamel paint with new colors. The paint was done with superb details and style.

Born as Miyagawa Toranosuke, Kozan established his pottery studio in Yokohama circa 1870s and later became one of the appointed artist to the Japanese Imperial household. Kozan Studio started experimenting with then newly available colors from the west in the 1880s, which resulted in the expansion of the palette and style that bridged the east and west aesthetic tradition. His work was exhibited in many international fairs that the Meiji government participated at the turn of the century and won many grand prizes. 4" h x 3.5" dia. The item "Two Japanese Ceramic Vases Makuzu Kozan Meiji Period Priced for One" is in sale since Wednesday, July 14, 2021.

This item is in the category "Antiques\Asian Antiques\Japan\Vases". The seller is "gallery-t" and is located in Atlanta, Georgia. This item can be shipped worldwide.